Data is beautiful, and so is Microsoft Clarity

Doughnut walls don’t just belong at weddings. If you use Microsoft Clarity, when you log in you will face a wall of doughnuts here too.

Unlike doughnut walls which are admittedly tasty, but expensive, showy and lack substance, Microsoft Clarity is free, simple to use and bursting with information. Sticking with the cake idea, it’s actually your trusty, weighty fruitcake.

What I can’t wrap my head around is why more people aren’t talking about it and why the people who are talking about it keep comparing it to Google Analytics. I’ll be completely upfront, the two are absolutely not comparable and should be supplementary to one another. Google Analytics can feed into Clarity if you allow it to do so. If you’re reading an article that is offering pros and cons of the two as if they are comparable, you’re wasting your time.

What is Microsoft Clarity and why haven’t I heard of it?

Microsoft doesn’t appear to be heavily promoting their new tool. Bing announced it’s launch on their blog in October 2020 to little fanfare. I started using it in November 2020 and felt like there were bits missing and it still wasn’t quite ready. It had been launched as a closed beta back in 2018 so Microsoft has been working on this for some time.

Microsoft Clarity is a tool that helps webmasters improve their user experience (UX) using data visualisation. It’s not here to provide you with a table of URLs and numbers. There is a bit of analytics information such as number of sessions and number of pages per session however, the information provided here gives a snapshot of how your website is performing i.e. are there any obvious pain points for users? You can see immediately if something is wrong upon opening the page from ‘quick backs’ (also known as pogo sticking), rage clicks and excessive scrolling which are prominently displayed.

What you get from Microsoft Clarity that is really valuable is that you can see heatmaps and recordings by page and by referrer.

Why else might you not have heard of it? Google is the dominant player in Search and in the Analytics market. Anything relating to Bing or Microsoft is often seen or treated as secondary. If Google were to be offering all this for free, us Search Marketers would be losing our minds.

So why isn’t Google offering this? I think we could speculate over a coffee and then a beer all day and then well into the night; they’ve got the minds and the money to make this happen after all. Google gets a lot of grief around privacy, so it could be something as simple as offering webmasters recordings of people using websites that might not quite have the optics they are looking for. We know Google is watching us but recording us? Mercy, no! One could also argue that Google can make more money from underperforming websites because users will click multiple ads to find what they are looking for.

Why, yes it is! They’ve developed this feature a fair bit since it’s launch. Within the settings under masking, you can mask all sensitive text such as email addresses or information entered by users. You can set it so that everything is masked, only ‘sensitive’ text is masked or none of it. You can also set it to mask by element using CSS Selector. Worth noting though that if you make any changes to the masking settings, this doesn’t apply retroactively.

Is there anything wrong with Microsoft Clarity?

I’m not one to look a gift horse in the mouth, this tool is free to use! However, if you want me to be critical, the heatmaps still aren’t as developed as what similar paid-for tools such as Mouseflow and Hotjar can offer.

There also doesn’t appear to be a way of labelling the elements that users click on so you have a list of class names that can leave you having to go on a short code review of the page you’re looking at. That could be easier.

If you have Microsoft Clarity set up on your website, it automatically triggers an event in Google Analytics and because they’ve not labelled it in a particularly helpful way. Your web designer would need to completely change the way that they code in order to label every clickable element in an easy to identify way. 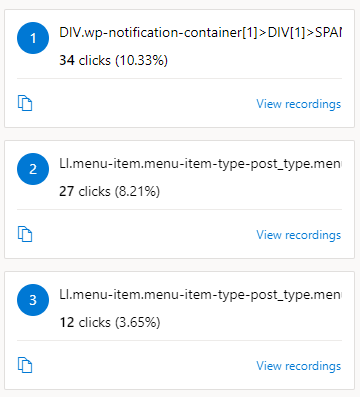 What is great about Microsoft Clarity?

Here is something I really liked about Microsoft Clarity: it doesn’t weigh your website down with code. The more scripts you’ve got running, the more plugins and stuff that you have running in the background the heavier your website and the slower it loads in any given browser. I compared a similar UX tool in November 2020 using Pingdom Tools and found that Microsoft Clarity used a smaller snippet of code that was also lower in priority on the page which meant that site speed was not adversely affected.

Did I mention, it’s free?

I love that with Microsoft Clarity, you can also connect and pull in data from Google Analytics so you can make the most of what they both have to offer. It’s definitely more collaborative than its competitors because you can share project and site information with people in your team using their own login details which is much better than having an agency login with access to all sites / data.

It’s also worth noting that Google Analytics uses data sampling (a statistical analysis technique that selects representative data points to identify trends) whereas Microsoft Clarity says that they give you everything. Just knowing that gives me a greater feeling of trust in the data supplied.

Should I be using Microsoft Clarity?

Absolutely! This is a tool that is still being actively developed. Unlike Google Analytics (particularly new version 4), you don’t have to study for and complete an exam to use it because it is so intuitive to use. If you have a curious mind, a website to work on and an internet connection, you can get great insights from this tool. Paid-for tools such as Mouseflow have much better heatmap screens but they don’t hold a candle to Microsoft Clarity’s doughnut wall when it comes to presenting the information in a clear and straightforward way. For no cost, Microsoft Clarity joins the dots in a way that other tools don’t currently do.

From just one screen I can identify more things that I want to look at for conversion rate optimisation (CRO) whereas with separate heatmaps and recordings pages, I have to go burrowing down a rabbit hole. That’s great if you’re looking to pass the time but here at Adtrak, we’re looking to maximise leads and sales rather than increase vanity metrics that have no impact on your bottom line.