At the beginning of 2017, the Nottingham Restaurant & Bar Awards campaign was rebranded and relaunched by Big Table PR, in partnership with Adtrak. Since its launch last January, as title sponsors, we’ve been busy making sure that the campaign is as successful as possible. 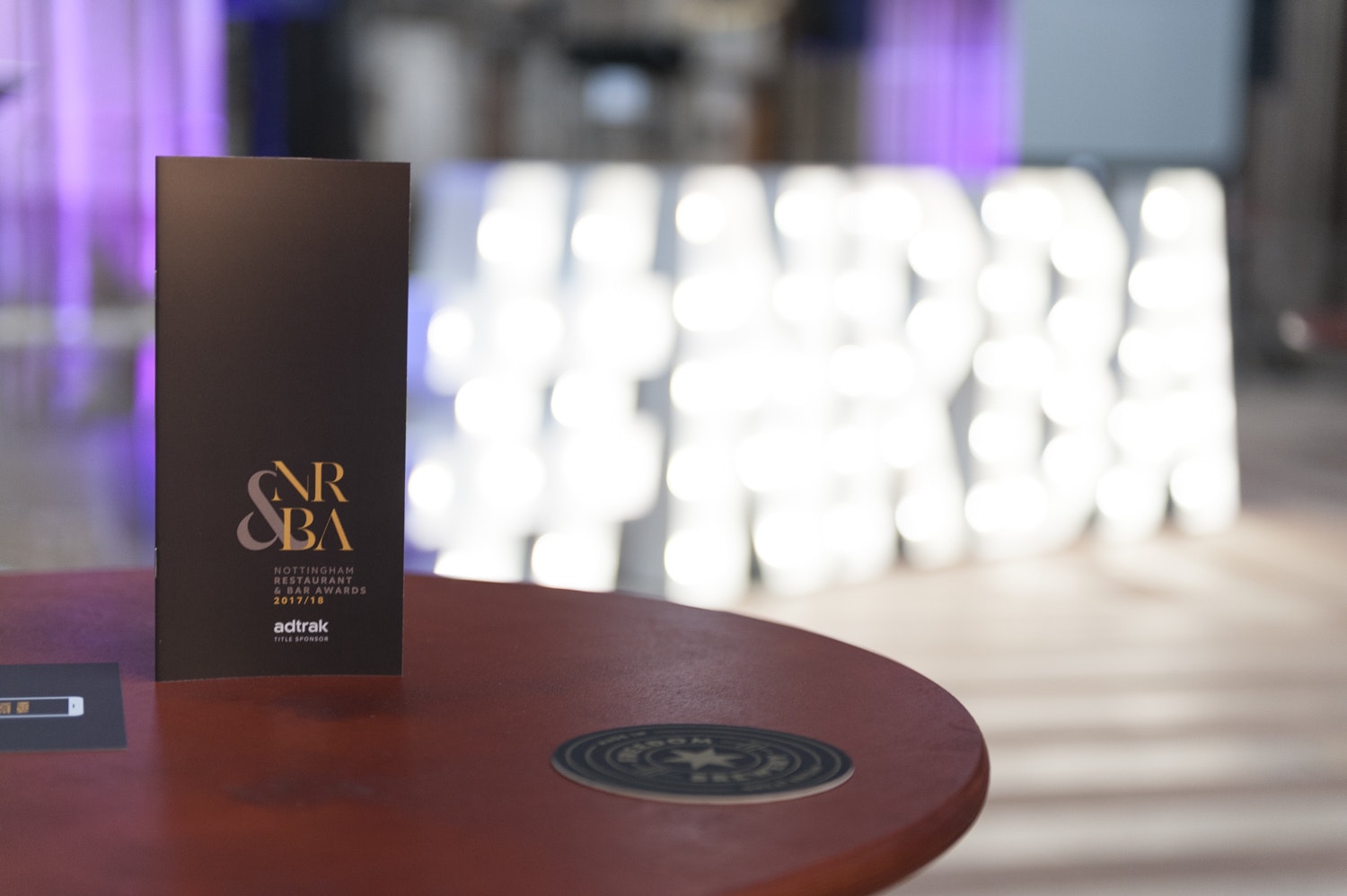 Ahead of the awards ceremony in just a few days, we thought we’d take a look over the last year and all of the hard work Adtrak have done to help get the Nottingham Restaurant & Bar Awards to this point.

So, what have we done?

It’s not been a quick process, and at some times, it’s not been easy either. The size and gravity of the project has meant that everything – from fonts to flyers – have had to be perfect. It therefore makes sense to start at the beginning of the journey we’ve embarked upon…

In August 2016, Alan Pearce and the graphics team began work on all of the branding, working with Big Table, to make sure that it was just right. The main aim was to create something that would be easily recognisable and considered a mark of quality in the industry – I think we can agree that it definitely hits the nail on the head!

Fast forward to January 2017 (branding now complete) we, alongside Big Table, pitched the idea of the awards to restaurants and bars in and around Nottingham. As expected, this went down a treat.

During February, Becky Bramwell began designing the NRBA website and Mukesh Randev was working with Big Table to understand functionality requirements. Copy was being written for the website collaboratively by Big Table and Ami Hassall. George Musson, overseeing the project on the whole, was busy getting general preparation underway for widening the marketing campaign to social media, website optimisation and creating a blog strategy.

March continued to be a busy month, filled with meetings, designing as well as preparing for the social media marketing to begin in April.

April arrived and Anna Bridgeman began the social marketing for NRBA, creating a strategy that included organic and paid social media advertising. Graphics were also busy creating informative brochures to be sent to the restaurants and bars in and around Nottingham.

Whilst this was happening in the office, Richard Dean, Alasdiar Purkis and Simon Congdon began filming for the first of many My Neighbourhood feature films. The purpose of the My Neighbourhood films is to guide viewers around the various areas of Nottingham and the surrounding areas.

Thanks to Mukesh and Becky the Nottingham Restaurant & Bar Awards website and blog launched in May, and we celebrated in true Adtrak style with a website launch party, and all of the sponsors were invited to join in on the celebrations. May was also the very first Email Marketing campaign (designed by James Rowe then taken over by George) to introduce the newly launched NRBA to the restaurants and bars of Nottingham.

June came and the first My Neighbourhood feature film was complete, guiding you around the Beeston area. As Big Table were keen to help out with the social marketing and so we provided them with a bespoke social marketing training session.

Meanwhile, Jack Whiting and Mukesh had been busy working with Big Table to create a directory on the website of all of the restaurants and bars in and around Nottingham, which was also launched in June.

In July, the articles were pouring in for the blog (overseen by George) and all departments were beginning to think about everything needed for the voting launch, which was coming up. This included interviews with celebs regarding their favourite restaurants, from famous Nottingham personalities such as Anne Davies, Sam Pinkham and Chris Cohen.

We also held a social media workshop and training session in July for the sponsors, as part of their sponsorship package, to help them utilise social media as an effective marketing tool.

The marketing campaigns ramped up in August, with all hands on deck as the voting launch was only just around the corner. George and Chris McCormick even went around the city centre handing out some of the whopping 50,000 table cards (created by Alan) to all of the eligible restaurants and bars.

Meanwhile, Anna held a morning’s social marketing workshop in the Adtrak office for restaurants and bars around the city. The workshop, offered as part of the perks of participating, aimed to help restaurants and bars maximise their social media presence. Attendees included Annie’s Burger Shack and The Last Chance Saloon, as well as The Cod’s Scallops and Hart’s Hotel & Restaurant.

September came quicker than any of us were expecting and in a blink of an eye, it was time for voting. We had a fantastic launch night on the 6th September at St Mary’s church in the Lace Market. This included a Facebook Live broadcast from Anna, live voting system headed up by Dale Phillips with help from the rest of our development team, and some fantastic video and graphics work. Following the launch event, voting was open to the public on the 7th September, which carried on into October.

We also organised local food and hospitality bloggers to provide their favourite Nottingham food and drink choices for the NRBA blog that they could share with their own followers on social media, also helping to raise brand awareness through their promotion.

The voting closed on October 6th and there was a total of (drum roll please) 48,609 votes from nearly 8,000 people! After a hectic month rallying around in September, we all drew a deep breath and relaxed a little in the office in October.

November came and the planning for the ceremony itself had begun. Photography were back out doing more filming, in this case for another My Neighbourhood and for the Best Young Talent – Back of House award (focussing on those in restaurant kitchens). This was being judged by industry experts at The Adams Restaurant at Nottingham College.

The Christmas run up was another lively month as the countdown to the ceremony really was on. The Graphics team were preparing all of the various pieces of artwork needed for the ceremony, from invites and programmes to the design of the awards themselves, and the seventh email campaign.

Another month also meant another set of filming for the Photography team, this time for the Best Young Talent – Front of House Award (focussing on those out with customers on the restaurant floor) as well as the Best Cocktail Award.

2018 arrived and here we are in January, with the ceremony at Colwick Hall on the 31st January, just days away!

Preparations and finishing touches are now fully underway for the awards ceremony – from graphics in videos, to social media strategies, website updates and so much more.

As a result of the hard work we’ve all put in, we have gained a few new clients, with many more prospects. But it’s not just about getting clients on board, we have: watched the website develop, traffic and rankings climb, had a fantastic voting turnout, and have had a joint reach and impressions total of a staggering 1,000,000 people from social media!

It’s safe to say that there’s been a lot of hard work put in, but a lot of fun has been had on the first of many Nottingham Restaurant & Bar Awards projects. Now, to find out the winners…